The heater that started it all

7 minutes
‹ Back to the listing

Sven-Olof Janson was a hard-working man. At a young age, he founded the company that over the coming decades would take him from a his small workshop in Halmstad to become a global company. Tylö is now a recognized sauna brand by enthusiasts all over the world. The journey truly took off in 1951, when a Finnish consul in Sweden asked Janson to construct an efficient and less expensive sauna heater than the market could offer at the time. 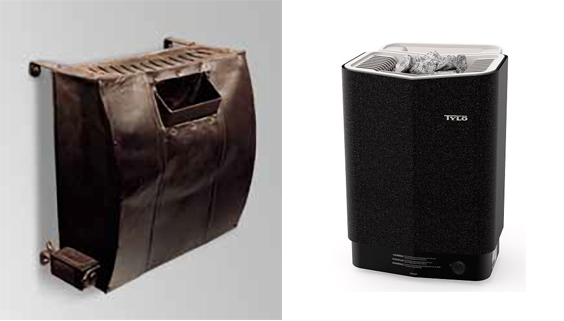 The first Tylö sauna heater, still fully functional when replaced 35 years after its first use. Quality is still at our core. Luckily, design has evolved.


Smart advertising as a driver
After establishing Tylö on the leisure market, things really took off when creative advertising was employed to further expose the sauna brand to a broader public. In 1960,  Malmö-based ad agency C17 and it’s visionary owner Bertil Pennman were instrumental in making Tylö a known brand by promoting sauna through storytelling, practical guides and incorporating celebrities advocating the benefits of sauna. 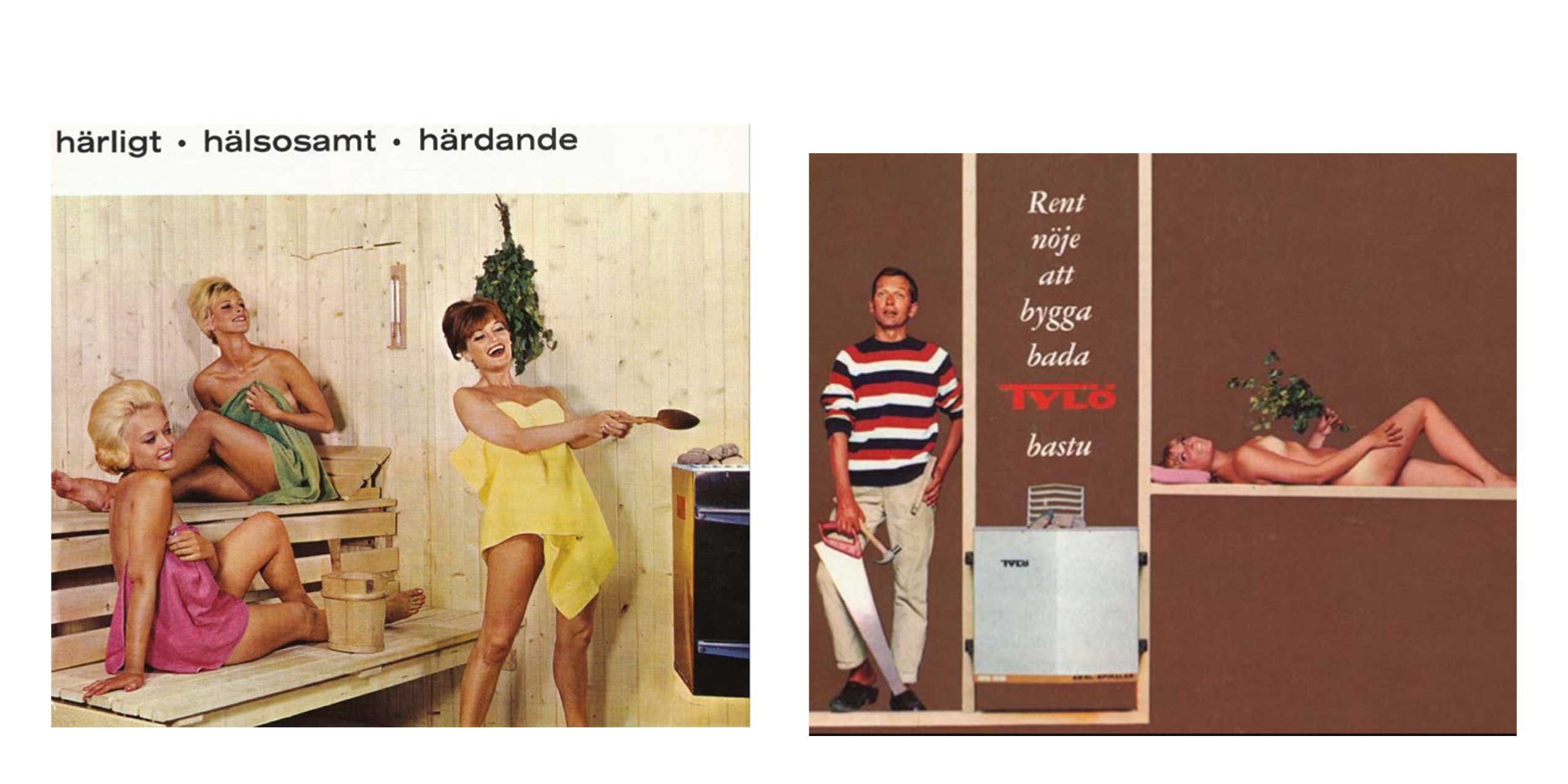 Technology and (too much?) skin
In the 1960’s, Tylö was well underway to become a sauna super power. Several technical inventions had been incorporated in the sauna heaters, for convenience and comfort alike. The 1960’s saw an integrated timer. This was also the time when stone compartments were added, surrounding the extremely durable heating elements. In the later part of the decade, Tylö’s ads featured naked people enjoying sauna. According to Sven-Olof Janson, this was the natural and only way to enjoy a sauna correctly. The public reacted differently, as the ads were seen in publications often catering to families. Some magazines, tabloids and papers reacted by banning Tylö ads.

Pushing product while showing skin proved too much to the public (in some cases) in the 1960’s.

The failing spy
The 1970’s saw exponential growth for the Tylö brand, butting heads with competitor Bacho who would, as it turned out, be left in the dust by Tylö’s latest invention – a new proprietary technology insured that the heater would automatically shut off, should something foreign or combustible accidentally be placed on top of the heater. Tylö employed students from the Gothenburg Business School to visit Tylö resellers around the country to present the groundbreaking new heater. With all the insight in the new technology, one of the students saw an opportunity to provide the concept to the people of competitor Bacho. The move did not fall on good soil. Bacho found it morally wrong to compete under terms built on espionage and handed the spy over to the police, and shortly after pulled out of the sauna business all together. 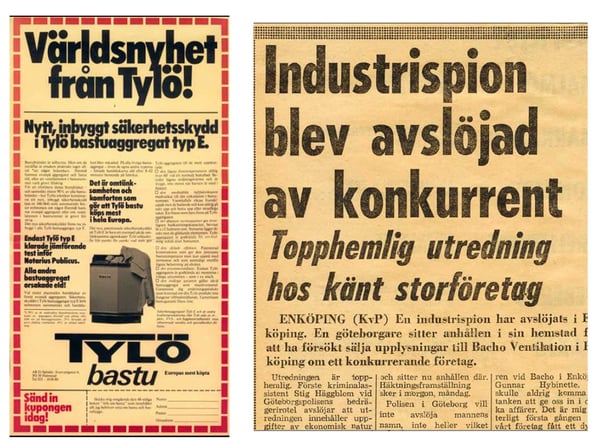 Industrial sauna espionage was hot news in the 1970’s.

Expanding the portfolio
In the late 1970’s Tylö introduced prefab shower stalls, following the trend towards showering, rather than taking baths. A cooling shower during and after sauna was and is a natural part of the sauna experience, and the showers took the market by storm, with some help from a successful ad-campaign. In the early 1980’s Tylö also developed its first generation of steam generators to meet an increasing market demand. The inherent experience from making sauna rooms and related technology such as control panels meant that creating complete steam room interiors of moulded plastic with integrated seats could quickly be brought to market. 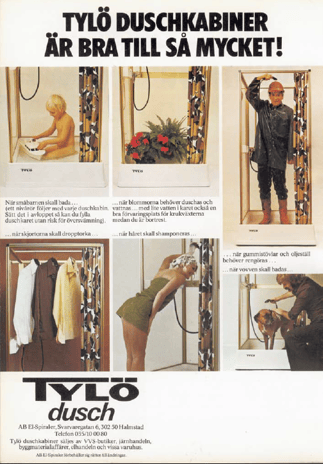 Successful advertising, displaying the multifunctional use, grew the sales of Tylö’s shower stalls.

A global market player
While the domestic market was failing and the Swedish economy as a whole was in a slump in the early 1990’s, Tylö’s portfolio with a lineup of both sauna and steam attracted foreign customers, with major traction gained from the immense Chinese market. To ensure the high quality synonymous with Tylö products, the company took on its biggest financial gamble since its founding days, by investing in its own plastic moulding facility, thus taking control over the steam room fabrication in its entirety.

Soft Sauna and home spas
In order to be able to provide all the goodness of a sauna to a broader audience, Tylö developed their heater line-up in the 1990’s to include the Combi heater. The magic of the heater was (and still is) its ability to put the user in control of the rates of heat and humidity. Tylö even gave this type of sauna therapy the name Tylarium. Lower temperatures and higher humidity meant that the whole family could enjoy the pleasures of a relaxing sauna. The Combi heater also brought Tylö a step closer to market a full spa experience with its built in ability for aromatherapy. The Combi quickly became a big seller and paved the way to the Tylette Centre, a steam room, rainshower and aqua-massage in ome. Tylette’s rapidly growing popularity meant export sales skyrocketed. 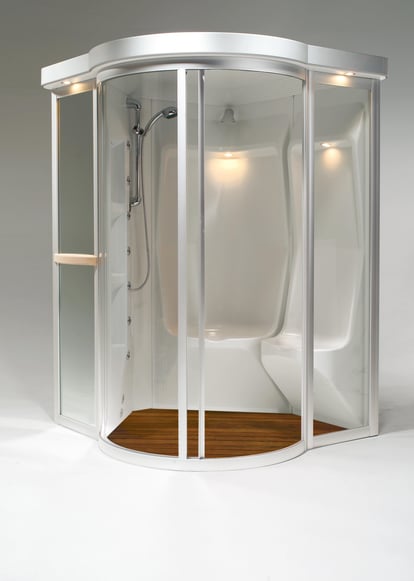 The founding father steps down
In 2001, founder Sven-Olof Janson, now in his early 70’s, passed the reigns of Tylö to his former Vice President Stefan Hylt, but remains the owner, keeping a close watch over his life’s work.

In 2008 family owned Tylö is sold in in entirety to Dutch venture capitalist firm AAC. At that time, AAC already owned one of Tylö’s competitors, Finnish sauna company Helo Group. The new company becomes Tylö Helo Group under a common leadership. The brands acted as separate entities in the market until 2017 when Tylö and Helo becomes TylöHelo.